How do Solar Panels Perform in Winter Conditions?

How do Solar Panels Perform in Winter Conditions?

As we move into our new year, people begin to think of ways to reduce their energy costs while achieving their environmental-friendly resolutions. As solar electricity becomes increasingly cost competitive, more and more people are installing solar panel systems in tandem with the traditional electric grid. As our smart energy network grows, we receive many questions on how do solar panel systems perform in the winter. Our goal is to dispel any myths and shine a light with the facts about how solar panels function in snowy conditions while addressing our most asked questions.

Do I need to be concerned about snow loads on solar panels on a flat roof?

With every installation of a solar power system, the roof and underlying structures are inspected and studied carefully by a professional structural engineer. Installation is only conducted after a report of approval from a structural engineer is completed. With this report, we are given the specifications for the weight of solar panels, racking, and the size of concrete ballast blocks. In other words, a solar panel system will never be installed on a roof with snow, if it cannot bear the load weight. With solar panels being installed for over the last 30 years in Canada, there are no problems with solar panels themselves being able to bare snow loads. Solar panels installed in Canada are engineered to withstand large loads of snow (>2 meters) and wind loads as well.

Do Solar panels work in the winter?

There is a common misconception that solar panels do not work during the winter months. Albeit, the production in November to February represents approximately 10% of the annual production, while the rest of the total yearly production is generated from March to October. It is important to realize the generation of electricity from solar panel systems are tied to the hydroelectric grid, which is based on total annual production. Production is metered by Hydro Quebec and with the Net Metering program the electricity that is generated from the solar panel system results in a credit on your hydro bill, which then can be withdrawn from during the winter months when there is less sunlight and where the electrical consumption is generally higher. 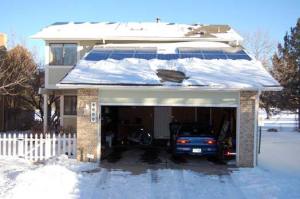 All solar panels installed by Quebec Solar are designed for Canadian temperatures and snow conditions.

Do Solar Panels Require removal of snow in winter?

In general, Solar Panels require minimum maintenance. If solar panels are on your roof, we strongly recommend that you do not climb onto the roof to clean off the snow. For security reasons the risk is not worth the small surplus of energy potential that can be expected during the winter months.

If you have any questions or comments, don’t hesitate to contact us.