The aspiration of societies in developing countries to reach the North American standard of living causes a panoply of environmental externalities, one of which is the increase in the consumption of fossil fuels which in turn causes an accelerated climate change. Although this aspiration is quite understandable, the precariousness of petroleum resources remains an increasingly worrying energy issue. In this regard, a drastic change in the global energy mix will take place when oil resources are exhausted.

The development of alternative energy sources to this fossil fuel is an increasingly attractive energy transition option, although there are already several options available. In this regard, having a small ecological footprint and a levelized cost of competitive energy, solar energy is among the most viable solutions.

The state of the global electricity mix

The ecological transition seems to be quietly taking place, but we still have a long way to go. Indeed, coal remains the primary source of electricity generation worldwide, whether among several developing or western countries. Knowing that it is the most polluting source of energy, a change in our energy mix is imperative.

The place of renewable energy sources in the global electricity mix

The figure above shows that solar PV is a big winner compared to conventional fossil fuels but loses compared to several other renewable energy sources. This is mainly because the production of solar panels is carried out via energy-consuming and polluting industrial processes which generate a large amount of waste.

However, a study made by six European researchers published in 2017 reveals that 4% of the energy generated by a solar system is offset by the energy necessary to build the field and provide the materials necessary for the production of the solar panels. Thus, although the ecological footprint may be greater than other renewable energy sources, the environmental payback time is very low depending on the energy produced, especially knowing that the lifespan of a system of standard solar energy is at least 30 years.

It is also important to mention the fact that renewable energy sources with a smaller ecological footprint are all more expensive than solar energy for the same amount of energy produced and that they are very difficult to adapt to the residential scale (mostly because of legislative dead ends which massively limits their establishment in residential areas). Solar energy is the most viable solution for you and the environment on a residential scale.

But is solar economically viable?

One of the main reasons for the increase in investment in solar energy is undoubtedly the constant fall in the price of solar panels in recent decades. On this subject, the image below shows the evolution of the price of photovoltaic solar panels in US dollars per watt installed from 1977 to 2015. Since 2010, the price has dropped from $ 1.41 to $ 0.30 per watt, a decrease of 78%! Although the price reduction was more pronounced at the very beginning of the marketing of the product, it remained constantly decreasing. The payback time of a solar energy system is therefore becoming increasingly short, to the point where it even exceeds that of fossil fuels.

The figure below shows the levelized cost of energy of the solar sector ($ / kWh) compared to that of diesel. Since 2011, that of solar energy has reached parity with that of fossil fuels. This therefore means that solar projects are more profitable than fossil projects.

The latest report from the IEA found that renewables are becoming more and more comparable to fossil fuels on price, with solar projects setting record prices at government auctions. The figure below shows the discounted cost of energy from different energy sources, this cost being the total cost of energy over the life of the equipment that produces it. Predictions are that within 10 years, the discounted costs of wind and solar projects will be lower than any other type of non-renewable energy source.

Ultimately, explained by their small environmental footprint, their affordability and their reliability, today’s solar energy systems are among the best energy options on a residential scale. Knowing that their environmental return time is very short relative to their long lifespan, the choice is easy to make, going solar has never been easier than now!

For more information or for any questions, please contact us directly. Our affordable, reliable and turnkey solar energy systems will fully satisfy you. Give us the chance to impress you and share our solar expertise with you! 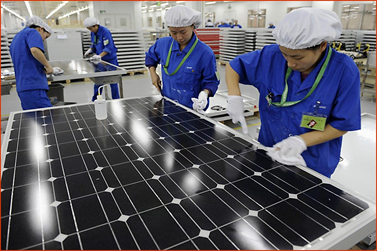